Drugs are not the primary driver of health spending growth. In fact, in a perfect world, drugs and vaccines that cure and prevent all diseases should account for a much larger share of overall health spending.

Simply put, the current preoccupation by policy makers and media on the prices of prescription drugs is, at best, misguided. It is true that innovative patent-protected medicines, particularly targeted personalized therapies for cancer and Hepatitis C, have contributed to the rise in drug spending growth. But before policy makers declare war on the patents that enable pharmaceutical innovation, consider the fact that eight of the ten drugs with the highest price increases in 2014 were generic drugs, not under patent and made and marketed by multiple generic manufacturers.

Pharmacy program managers within government and among private insurers who suggest that new therapies are unaffordable ignore the value and the positive effects that these medicines have on overall health spending. In the case of Hep C drugs, the costs of a regimen of drugs to cure a patient may exceed $50,000, yet a cure for Hep C can replace approximately $300,000 in overall treatment costs including a liver transplant.

During the past five years, spending on healthcare in the U.S. grew by $538 billion. Growth in spending on hospitals and other institutions (36.9 percent), health professional services (23.8 percent), and the net cost of private insurance, i.e. the difference between the costs of benefits and the price of premiums (11.7 percent) accounted for over 72 percent of overall health spending growth.   Spending on prescription drugs accounted for 12.1 percent of overall health spending growth.

Health policy makers have long shown that they are far less than capable of assessing the value of new medicines when assessed over time and against the overall health spending resource base. There is a myriad of mechanisms for assessing the value of a medicine to determine its affordability within a drug budget. But there are very few mechanisms that judge the affordability of a drug against the overall health budget or against the totality of all government spending. 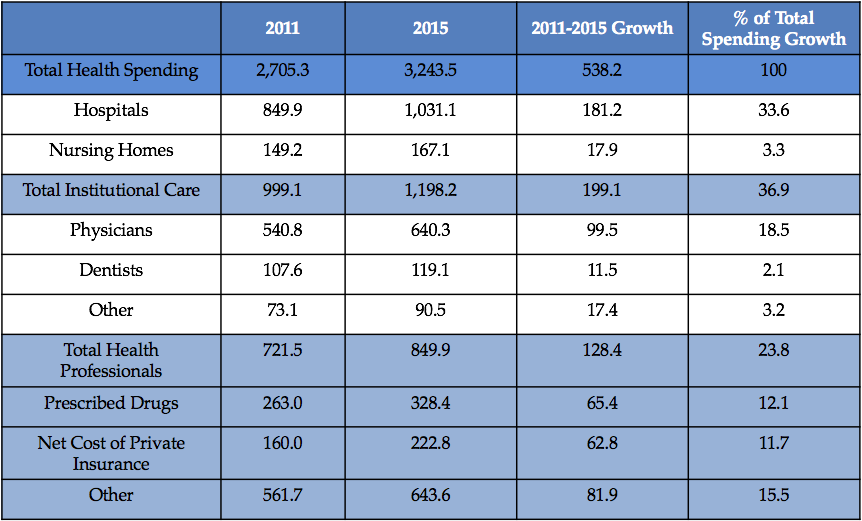